On February 17th Coach Jeff was inducted into the Hall of Athletes at LaSalle University. 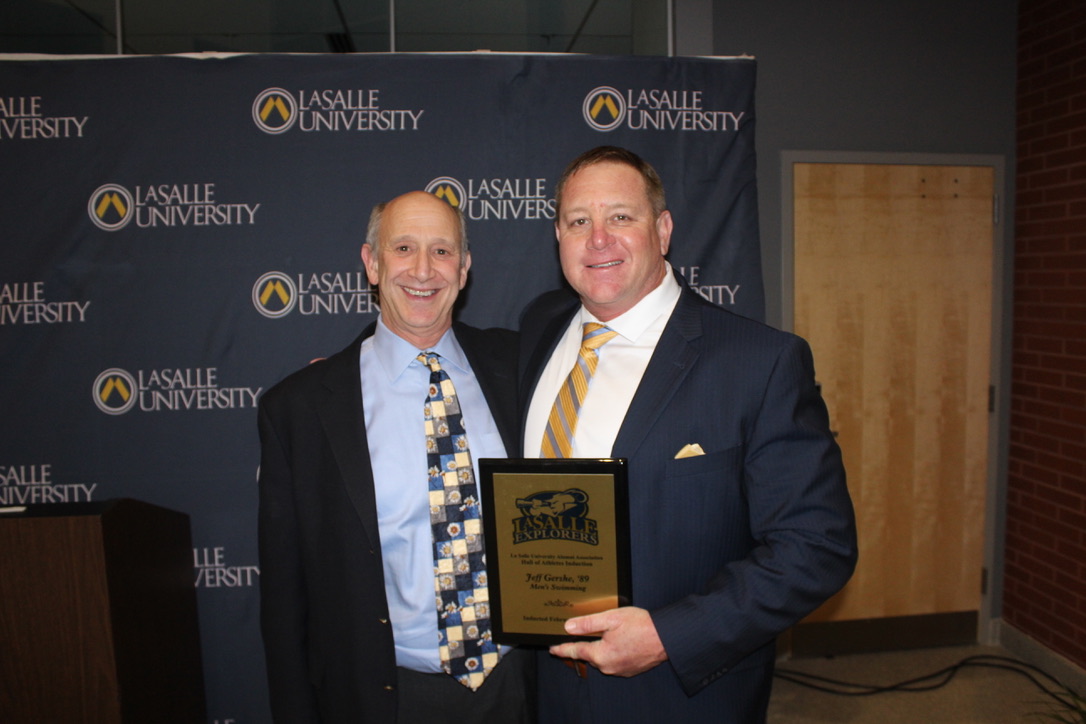 This Summer we are offering 2 Sessions. Summer A- 6 Weeks from June 6 thru July

18th.  Summer B will be a 5 week session and starts July 20th and swims thru August 22nd . This will allow our families that take Summer vacations to have options for Summer Lessons. And of course you can swim all Summer long and enroll in both Sessions.

Remember with more pools open for Summer,  follow the Safer3. . Safer Water means identifying where the risks are with any body of water (bathtubs, pools, spas, lakes, rivers or oceans) and learning how to reduce those risks. For example installing barriers such as isolation fencing around a backyard pool would reduce the risk of unauthorized access to the pool by young children. Safer Kids covers the behaviors necessary for both kids and parents to promote water safety. These water safety tips include constant responsible supervision by adults, along with swimming skills attained through ongoing qualified instruction for kids. Safer Response overviews emergency response techniques and emergency action plans as a path to water safety. Learning cardiopulmonary resuscitation (CPR) and first aid, as well as having a phone by the pool at all times, are just a few of the water safety tips covered here.

Just Swim is honored to be part of the Safer3  Water Safety Foundation’s Public Service Announcement Videos. These videos will be seen in doctors’ offices, medical clinics , and hospitals throughout the U.S. These videos urge viewers to focus on the three common elements of drowning: water, people, and response. Families our Just Swim Swim School participated in the making of these water safety videos. We thank our families that helped in the making of these important videos. We hope by educating the public in water safety we can make everyone SafeR in and around the water. This video focuses on creating a safer water experience while in pools & spas.

The  Safer3  Water Safety Foundation has produced  Public Service Announcement Videos to inform everyone about water safety. Just Swim is proud to have participated in the making of these PSA videos. These videos will be seen in doctors’ offices, medical clinics , and hospitals throughout the U.S. These videos urge viewers to focus on the three common elements of drowing: water, people, and response. This video focuses on creating a safer water experience while on vacation.

Just Swim is proud to have participated in the  Safer3 Water Safety Foundation’s Public Service Announcement Videos. These videos will be seen in doctors’ offices, medical clinics , and hospitals throughout the U.S. These videos urge viewers to focus on the three common elements of drowing: water, people, and response. This video focuses on Water Safety in Open Bodies of water such as lakes and the ocean.

The Boy Who Could Swim Book Launch Event.
A wonderful evening and opportunity to learn more about the book,  and gathering with other children’s book lovers and enjoy complimentary Hors’ Doeuvres and entertainment. Book signing to immediately follow.

Join us as we celebrate the release of Vahnessa’s first book. We look forward to seeing you there!

This is an important book for any family who has a child. Water safety is a necessary precaution as any family who has lost a child to drowning well knows. Written by a mother who lost her precious daughter, Vahnessa Estien, tells of her son Michael’s journey of learning to swim. Not an easy thing for a young child. But Michael perseveres and learns the rewards of feeling safe in the water and what fun he can have.

A couple of weeks after Vahnessa Estien’s two young sons began swim classes, she revealed to instructor Jeff Gershe a secret that drove them both to tears: Her daughter Soleila drowned in a pool when she was just 2.

“We had the good fortune to have two more children,” said Estien, 34, of Hollywood. “So I told Jeff, we are doing what I should have done with my daughter. I don’t want history to repeat itself.”

Neither does Toni Rodriquez, who lost her 1-year-old daughter to drowning in 2011.

“You don’t want to walk my journey,” Rodriquez said. She also has two children taking classes at Gershe’s Just Swim in Cooper City.

The two mothers who both know a profound sense of loss are sharing their stories of grief as the Memorial Day weekend signals the start of swimming season.